I have read somewhere in a news report that Minnesota has an average of 41 tornados in a year, mostly between June and August.  Seeing damages from the Tornado that swept through the Midwest this past weekend, I felt that I should be more alert in weather conditions in the future.

Anyway, this Sunday, while we were heading to an outdoor birthday party, we saw low clouds, really low clouds.  They then turned into Nimbostratus clouds and produced heavy rain.  I said to my husband that I saw a scud cloud that could turn into a funnel.  By the way, I might not have used the right term.  I am not a meteorologist. I asked if we should just leave instead of attending the party.  My husband responded that the precipitation could be just intense but short-lived.  Luckily it didn’t last long and didn’t turn into a twister or a severe thunderstorm.  I am glad that we showed up for the party.  My son had a wonderful time.  He got to fish for the first time and played baseball with his friends.  My daughter also had fun catching bugs.  She showed me a big caterpillar but my reaction scared her and she dropped the caterpillar on the ground.  I probably shouldn’t have said “Eewww…”

This is how big the caterpillar was and what it looked like.  By the way, I didn't bring a camera with me so I didn't take a picture.  I searched online and found a match that is close enough in type, color and size.  Picture downloaded from Wikipedia. http://en.wikipedia.org/wiki/Caterpillar 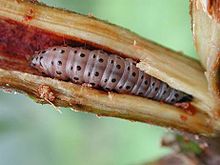