Mind your own business or even better kill them while you can?

Is this a good time to mind your own business as we see Japan’s nuclear plants erupted in flames?  If not for the sake of humanity, but for the sake of your own selfishness, wouldn’t you want to land a hand to Japan at this critical moment?  Maybe you would like to think that the radiation would not reach you.  Yes, we can all hide in our own shell and think that it will never happen to us.  Look at what kind of safety precautions are in place for Taiwan’s nuclear plants.  In addition, look at what China has put in place.  There are a dozen of nuclear power plants in China, mostly located on the southeast coast.  When its radiation leaks, it would reach Taiwan immediately, nobody in Taiwan would be able to escape the fate.  This event should teach us something, not just the civilians but the government officials in particular, other than empathy and humanity, that cover up is the worse approach and will subsequently lead to devastating results.  Wouldn’t you feel comforting to hear Premier Wu Den-yih (吳敦義) assuring the Taiwanese that Taiwan’s three operational nuclear plants were “much safer” than those in Japan because they were “fourth generation” — something both Taiwan Power Co (Taipower) and the Atomic Energy Council (AEC) have said is wrong!  In fact, there was no fourth-generation nuclear reactor, not even a third-generation reactor in operation in Taiwan.  How comforting it is to have Wu Den-yih as the Taiwanese Premier! (http://www.taipeitimes.com/News/front/archives/2011/03/17/2003498375).  Didn’t the unprepared rescue efforts from Typhoon Morakot teach us something?  Without plans for safety precautions, without an efficient government to mobilize the rescue efforts, and without a single department dedicated to disaster prevention and response, should another natural disaster strike Taiwan, the outcome would be even devastating.  Taiwan and Japan share similar fate with frequent earthquakes.  Can you bury your head in the sand and pretend that whatever happened in Japan will never happen in Taiwan?

As we talk about minding our own business, you might have forgotten the helping hands that the Japanese provided during Typhoon Morakot disaster, while you sit there and watch the tragic news from Japan and even condemn the Japanese to death like what Chao Chih-hsun (趙志勳), office director to KMT Legislator Huang Chao-shun (黃昭順), at the weekend of the Japanese earthquake crisis, wrote on his Facebook that he would “even like to attack Tokyo and kill tens of millions of people” and that Japan should “return the Diaoyutai Islands (釣魚台), then we will consider giving aid ….”, think twice if this is not going to happen to you.  Sadly, there are still people who get so tangled up in politics and lose any single thread of humanity.  J Michael Cole has a more comprehensive write-up about this.  The link is: http://fareasternpotato.blogspot.com/2011/03/time-to-end-silly-internal-divisions.html>.  Below is the screen print and embedded link to Chao Chih-hsun’s facebook. 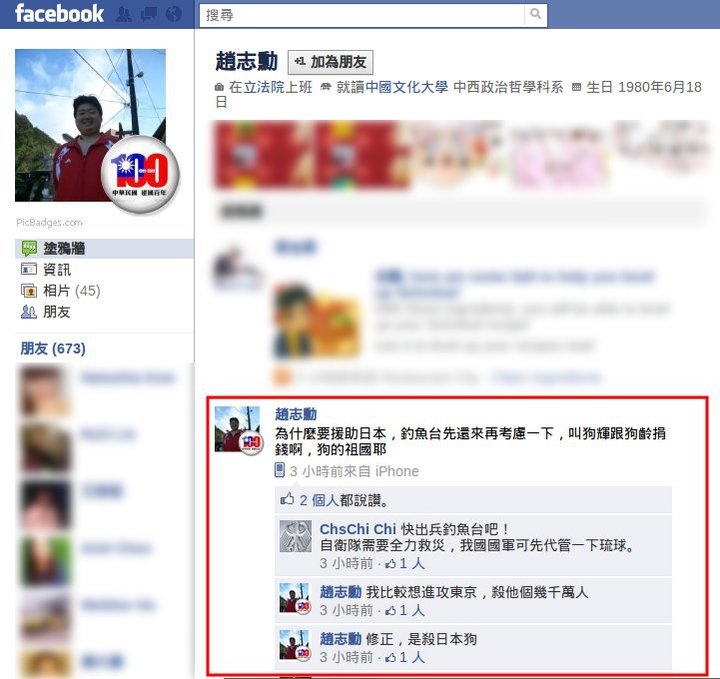 I am not trying to say that all the Taiwanese are like that.  I merely want to ratchet things up a notch or two, so you won’t forget the reality in this all seemingly perfect world.

Anyway, it makes me think about the Holocaust where roughly six millions of Jews were killed, the Tolerance Education Center, established by Holocaust Survivor Earl Greif, a nonprofit organization seeking to educate the public about the devastating effects of prejudice and intolerance (http://www.toleranceeducationcenter.org/about/), and how a Holocaust survivor shared his message of tolerance with the students and his story during Germany’s occupation of Holland. (http://palmdesert.patch.com/articles/holocaust-survivor-shares-message-of-tolerance-with-students)

Talking about the nuclear plants, these are some interesting articles I came across.  I believe that people living in Taiwan would find these articles valuable.

The cost of nuclear power (David on Formosa